You have chosen… poorly

It was brought to my attention that the filter on our 3 laser LSR2 might not be optimal for the AmCyan channel (490/40 bandpass, also used for Horizon V500, CFP, Aqua Live/Dead dye, and Q525)–it was centered on the peak of Amcyan, but might also pick up stray light from the 488 laser. After some testing, I discovered that this was indeed true, as the image below shows (click to enlarge).

I used 6 peak beads and set the brightest bead to 10^5.  Plot 1 shows the 490/40 filter, notice the high signal for the lowest peak, “P2”. Using a 525/50 to avoid the 488 region (plot 2) you can see the dimmest bead has much greater separation from the next peak “P3”, in fact 4 times the separation based on a ratio of the means. I repeated the measurements setting the brightest peak to 10e4 instead of 10e5, and while the difference is not as evident visually (plots 3 and 4), mathematically it is again a 4-fold difference.

To show it is indeed due to the blue laser, I then used APC as the threshold parameter and blocked the blue laser to generate plot 5, and saw a 2-fold improvement compared to the same settings with the laser on, so there is still some spillover of light from the blue laser. 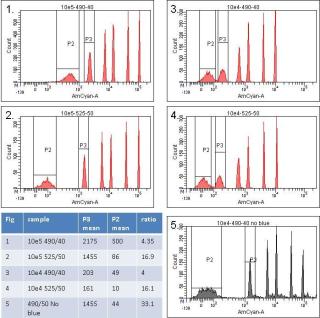 At least running with the wrong filter didnt turn me to dust, like this guy that also “chose…poorly”

This entry was posted in Uncategorized. Bookmark the permalink.